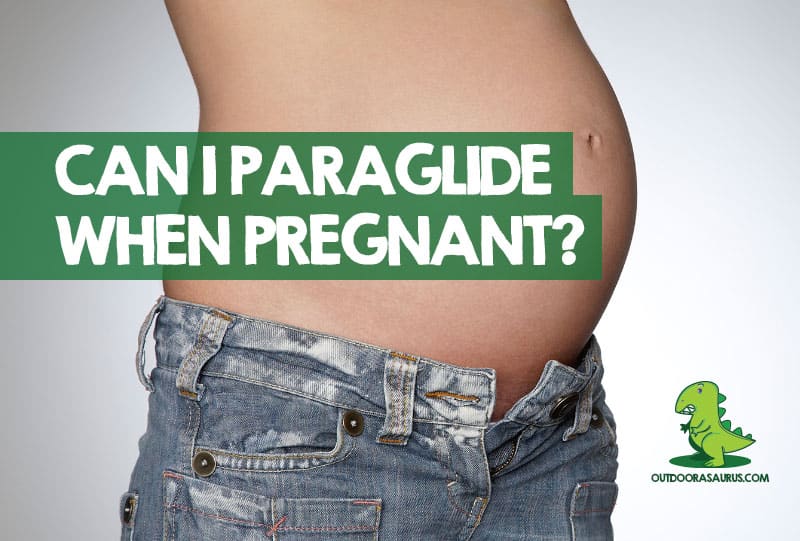 Beginner paragliders or people wanting to try it out whilst on vacation will be rightly concerned about the risks to their unborn baby when pregnant. In this guide I will explore whether or not you can paraglide when pregnant, with some additional comments from very experienced paragliders.

Experienced paragliders will often continue to fly when they are pregnant. However, for novice or beginner paragliders planning to fly for the first time or whilst on a vacation, paragliding whilst pregnant is not advisable due to the risks during landing and take-off.

Is paragliding safe during pregnancy?

Paragliding is statistically as safe as driving and it’s very rare for flyers to be hurt due to equipment failure.

It’s not always speedy sport, and providing you work with a qualified instructor, you should be in safe hands.

Why I don’t recommend paragliding during pregnancy

However, there are certain elements to paragliding that could present a risk to your unborn baby.

Doctors advise that you should not partake in any type of sport that includes the following risks.

Whilst paragliding is relatively sedate once you are airborne, take off and landings do present a risk, as well as the strong winds you could encounter.

Another common issue you may face when paragliding is motion sickness. Research suggests that women, and particularly those that are pregnant, and more prone to nausea during flight.

You can read more about how to prevent motion sickness when paragliding elsewhere on Outdoorasaurus.

Landing can be dangerous

The risks to pregnancy aren’t necessarily during your flight, but instead during take-off, and more specifically during landing.

Midwifes will often advise against sports such as paragliding where there is a chance of a high impact bump.

If you have a bad landing, you could harm your unborn baby.

Another reason you might be told not to paraglide during pregnancy is the high altitude.

However, most paragliding flights are done under a height of 150 meters (500 foot) which is not considered to be high altitude.

Thus, the effects of high-altitude during pregnancy should not be felt during paragliding so it’s not a consideration that needs further discussion.

Will paragliding companies let you fly if pregnant?

If you do decide to fly during any stage during your pregnancy, check in advance with the company you are booking with.

Be honest with them about your stage of pregnancy and be prepared for some of them to not want you to fly.

You might also find that your insurance policy won’t cover you for outdoor sports of this nature.

Many mothers might feel that they need to give up paragliding when pregnant, with the most common reasons coming down to risk (the main factor), plus feeling of responsibility and lack of sleep.

However, professionals will often paraglide whilst pregnant, and not all of them stop as you can see from the comments below!

In the excellent Paraglider Podcast, I listened to an episode called “Flying When Pregnant”. You can listen to it in full on iTunes (it’s episode 25).

In the podcast, you can hear the views from four paragliding women, none of whom gave up the sport whilst pregnant.

I’ve included some abridged versions of their comments below where they share their experiences.

But as a caveat, all these 4 women are very experienced paragliders, rather than a pregnant lady planning to paraglide on a vacation whilst pregnant.

“I didn’t know for the first 3 months I was pregnant and was still actively teaching students through the first trimester. When I found out I decided to talk with my midwife who told me that because I had been doing it safely already and was very experienced, she said there was no reason why I couldn’t do it. She said I need to trust my instincts, and to only stop if it felt dangerous, but medically there was nothing against it.”

“I flew until 1 month before I gave birth. The only reason I stopped was I was unable to fit into my harness due to the weight gain. I was unable to forward launch due to the bump at this stage! Some people at the take-off noticed I was pregnant and did think I was crazy to still fly but I explained I was only flying when I felt like it when conditions were perfect.”

“My son would be active in my belly during take-off, but when in the air he settled down and relaxed. When I got into the air, I had to relearn how to thermal and turn as every time my center of gravity was somewhere different I was unable to move any more in the harness and had to work more with the brakes. I put in 50 hours of paragliding before he was born.”

“People didn’t believe I was flying while pregnant, but I felt good about doing it, and my baby was happy, so I was happy. I took more care than I would have done if not pregnant.”

“People think paragliding is dangerous, but those are people who have never done it. I know flying is good for me, so I did it up until I was 17 weeks into pregnancy.”

“Afterwards I had an accident in my car, so had to stop, but it wasn’t by paragliding. Without the car accident I would have carried on, but probably would have stopped as it’s exhausting to fly any more than one hour with a big belly”

Paragliding mum from the UK

“It was never option to give up initially and I flew in the early stages when I had no additional weight. But that’s arguably the worst time to fly as everything with the baby is starting to form.”

“I did actually have a bad landing at two and a half months’ pregnant, so decided then was time to stop paragliding until after I had given birth.”

“With my second child I decided not to paraglide at all during the pregnancy, but changed my mind when there were a couple of very calm evenings. It’s every woman’s decision depending on their own skill set and confidence”

“I landed badly and broke my leg when pregnant. It happened as I was just descending gently and had decided to slope land as the conditions were lovely. I tripped over and broke my leg at five and half month’s pregnant.”

“I was pilloried by the press as they had taken a very keen interest in me and any women doing anything dangerous at the time. I was on live radio, quiz shows, and got a hell of a bad time.”

“But I feel very strongly that it’s every woman’s right to decide. I only stopped when I could not get into the harness anymore. To put it into perspective, I wouldn’t have gone horse-riding as I am not an expert on that, but paragliding is different!”

Sports you can do when pregnant

Physical activity and exercise are good for you during pregnancy, but it’s certainly worth making some changes to how you exercise.

Problem signs to look out for

If you have decided to go paragliding whilst pregnant, or are taking part in any other sport, there are some tell-tale signs to look out for. If you feel any of the problems listed below, you should immediately consult your doctor:

Handy Hint: You can take a look at some recent statistics which show recorded fatalities from paragliding in this paragliding versus hang gliding safety comparison article.

My personal view on this is that it is better to be safe than sorry, there will always be risks attached to paragliding, no matter how experienced you are.

For beginners and novices, I would certainly recommend against it.

However, as we’ve seen with the comments above, many paragliding professionals have been known to fly up until one month before they gave birth, only giving up when they could no longer get into the harness and things became uncomfortable.

If in any doubt, please consult a medical professional as this guide is for informational purposes only and is not intended to be expert advice.